Preaching Law and Gospel in a Politically Divided World 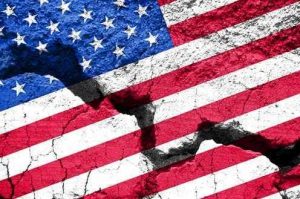 As I write this article, hundreds of children and parents remain separated from each other on our southern border, and Americans debate whether or not they are illegal immigrants; a travel ban from seven predominantly Muslim countries remains in place; Manafort has been found guilty and Cohen has pleaded guilty; Republicans and Democrats are holding their breathe to see if Judge Brett Kavanaugh will be voted on to the the Supreme Court, and the pending midterm elections loom large over it all.

Preachers, too are divided. Those who lean left are tempted to preach about caring for widows and orphans and standing up for inclusivity; those who learn right are tempted to preach about the crumbling of American society and upholding family values, and many in the middle do not know what to say from the pulpit or are afraid to say anything at all.Cards on the table. I come from the Lutheran (ELCA) tradition. Of course, my denomination was born out of the political and ecclesiastical fights of the sixteenth century and what Martin Luther viewed as abuses of the Catholic Church. During World War II, we Lutherans are proud to say that German Lutheran theologian Dietrich Bonhoeffer formed the Confessing Church in opposition to the Nazi movement and the collaborating state (Lutheran) church. Bonhoeffer was executed for his part in a plot to kill Hitler. But in the present days, Lutherans are considerably quieter. Many clergy lean left; many congregations lean right, and hardly a political word is spoken from our pulpits. This is not always a bad thing. We have all seen how the church can be abused by political agendas, and we know that Jesus is bigger than any of our pet political causes, but those of us who hold a Bible in one hand and a newspaper (or at least a IPad) in the other cannot help but wrestle with what our faith has to say about the ongoing and tumultuous issues of the day.

We want to be honest and bold about truth as we understand it but also humble, knowing that anyone who is certain that she speaks for God is always on thin ice. We want to be helpful to the congregations and communities that we serve, offering guidance and theological reflection on the world around us, without violating believers’ abilities to think for themselves or to disagree with us. And most of all, we want to be faithful to the Word of God, knowing both that we might be wrong and that God can speak through us.So what is a trembling, faithful preacher to do in the chaos of political division in 2018 and beyond? Let me suggest not answers, but four guideposts, as your wrestle with modern issues and ancient texts.

Preach Issues, Not Personalities. There is no denying that Jesus was political. He preached hope and healing in a culture where poverty and political corruption ran rampant. He called individuals and communities to justice and forgiveness, but he did not go after personalities. The names “Herod,” “Pilot,” and “Caesar” appear quite infrequently in the Gospels. Thus, it is quite faithful to preach that we should love our enemies, but when we name that enemy as a person that our hearers know, they will hear nothing else that we have to say! Moreover, we run the risk of placing our judgements over the Gospel imperative.

This does not mean that we should water-down the scandalous nature of the Good News. We can preach radical hospitality at the southern border and abundance for food insecure families in rural areas without blaming the Republicans. We can faithfully preach Christian family values and admit that our society is not where God wants us to be without blaming the Democrats. You and I LOVE to blame individuals or groups that are “not us” for the problems around us. But most of the time Jesus, and certainly Paul, spoke to and about the community of faith, rather than to particular individuals.

Include Yourself in the Sin that You Are Naming, The truest answer to the question, “What is wrong with the world today?” is, “I am.” One of the church’s greatest powers is its ability to call the world to confession. Our job is to name sin and call it out without flinching, but when that sin is somehow “other” and apart from us, we run the deep risk of being pontificating hypocrites, and the world has enough of those! Recently, I was preaching about the early church’s radical inclusion of gentiles. In order to help the congregation understand this profound insider/outsider reality in first-century culture, I cited a few examples in today’s news of white people calling the police on various black people who, though innocent, that the callers thought were guilty of crimes. To bring this home, I then spoke about my own racism and inherent biases.

Suggest a Proactive Solution. Naming a problem is always easier than finding a solution. In our sinful ways, it is fun to stand on the sidelines and complain about how evil, stupid, and incompetent “those people” are, but it’s a lot harder to suit up, get out on the field, and start playing the game more effectively than “they” do. Time and again Jesus has harsh words for those who judge. Instead, the Christian life calls us to change the world for the sake of the kingdom. Hate of anyone is not a kingdom value. Paul makes God’s values clear in Galatians. Of course, they include: love, joy, peace, patience, kindness, goodness, faithfulness, gentleness, and self-control. So what are you doing in your preaching to encourage the development of these values among your people?

Lutherans celebrate Lent, and along with Roman Catholics, often “give up something for Lent.” The idea is that through our own small sacrifice, we remind ourselves of Jesus’ huge sacrifice. It’s not a bad practice, but I have long found it more helpful to add a spiritual disciple during Lent, rather than take something away. Instead of preaching about the political problems of the day, why not mobilize our volunteer armies to demonstrate our kingdom values? If you are concerned about crumbling societal values, start a free parenting class for single mothers. If you are upset about growing distrust between groups, reach out to a local mosque and find ways to partner with them. The possibilities are endless, not easy, but endless.

Create Safe Spaces and Communities of Moral Deliberation. One of toughest parts of the current political environment is our dwindling ability to talk and really listen to each other. We retreat to our own enclaves, watching our favorite cable channels and listening to our favorite podcasts, having less and less interaction with the “other side.” This allows us to see them less as people and more as positions that we rail against. The church is in a unique position to help bridge this gap. Our congregations are made up of people from all walks of life, holding all manner of political opinions. More importantly, in many cases, we have been a part of each other’s lives for years. We have been in each other’s homes. We have cried together and laughed together. With a little effort, we can dare to have respectful, political conversations with each other because we love each other as Sisters and Brothers in Christ. Preachers can open the door. When preaching the Gospel takes us into politically dicey areas, we can admit how we have struggled with these issues and how our faith has lead us to our present positions. At the same time we can claim our uncertainty about God’s stand on these issues, and we can be clear about our abiding love for those who disagree with us. More than that, we can invite the conversation to continue after Sunday morning. We can intentionally invite those who are hurt or angry about what we have said to come talk to us. We can create spaces and set healthy ground rules for conversations about complicated issues in our congregations.

People have lots of places where they can go to find others who think like they do. Our job in the church is to grow disciples by providing opportunities to listen and learn, love and serve, especially people who are very different from us because we are ALL precious children for whom Jesus died.

There are no easy answers to preaching politics from the pulpit these days, but I know this much: to say nothing about the issues of the day is to abandon our people, leaving them with few skills to live out their faith in the modern world; to say whatever we hear on our favorite cable channel is to abandon the Gospel, leaving our people without a critical, faithful witness in a messy world. We are called to wade in regularly, boldly, and humbly, speaking up for God’s justice and God’s mercy, even as we carry these treasures only in earthen vessels.•

OUR MISSION
Saved by the redeeming grace of God, we proclaim Christ crucified through worship, service and love of neighbor.